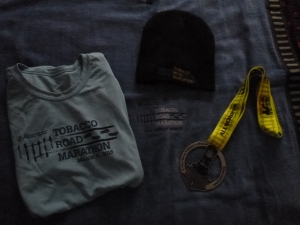 This race has long been on my wish list, so when I found an empty weekend it was easy to decide to register for it. The course traces an abandoned railroad corridor of the Norfolk Southern Railroad and was integral in transporting tobacco leaf from farms in Wake, Chatham and Durham counties to be processed at the American Tobacco Company. Railroads declined as did the growth of the tobacco industry and the tracks were removed in 1987. In 1995 the NC Department of Transportation bought the corridor from Norfolk Southern and officially began its development as the American Tobacco Trail.

The race is held on Sunday so we flew to Raleigh-Durham early on Saturday morning. A rental car is a necessity since the host hotel, the Embassy Suites, is several miles from the airport and the start and finish of the race are in Cary, NC, a short drive from the hotel. The hotel is a good choice because it is close to a number of good restaurants. Two we really enjoyed were Rally Point Sports Bar (their hush puppies are big and delicious) and Firewurst, a place that specializes in sausages and hot dogs but my favorite item was their sweet potato fries. They also serve local beer on tap. The expo is right in the hotel, making it especially convenient. In addition to a short-sleeve Carolina blue tech tee shirt, racers also received a nice warm hat.

In reality, the marathon does take a bit of planning, because racers have to get to the USA Baseball/Thomas Brooks Park (the start) or take a shuttle from the NetApp parking lot 15-30 miles away. It was also possible to buy a $5 parking pass that would allow runners to park at VIP parking right at the start, a good idea if Darcy had planned on waiting for me, but a waste for us since he was planning to just drop me off and return to the hotel for more sleep and a hearty breakfast. To avoid the hectic rush of traffic, I ended up taking the 5:30 am shuttle and waiting at the complex until the 7 am start. Fortunately, I found a heated indoor restroom and spent most of my pre-race time inside, with a dozen other freezing women.

At the end of the race, Darcy was able to easily find a parking spot at the baseball complex because all of the half marathoners and most of the full marathoners had already finished and left. My advice – if you are driving yourself, do buy the parking pass (there is a limited number and you must buy one when you register for the race – but if you are getting dropped off and then picked up afterwards, get a ride to either the baseball complex or the NetApp parking lot where you can pick up the shuttle. If parking passes are sold out, park at NetApp and take the shuttle to the race and back again afterwards.

Enough about logistics. The race itself was memorable, if only because it was a beautiful day, with cool temperatures that slowly warmed to the mid-sixties, and no rain in the forecast. The trail is part packed dirt with an asphalt lane, plenty wide enough for runners to greet each other on the two long out-and-back sections. There is only 2 ½ miles at the very beginning and 2 ½ miles at the very end that are on road. I had no worries about getting lost because of this; however, I did have to ask people where to find the finish line during the last mile or so because other runners were scarce, there were no signs, and only one volunteer to point the way.

Other than that, the race was a joy. The well-groomed dirt sections were easy on my feet and legs and there were plenty of aid stations with enthusiastic volunteers. The few road crossings were staffed by courteous and helpful police and posed no problem at all. I enjoyed doing a few miles with marathon icon Larry Macon and saw a number of other Maniacs, including Nick and Matthew.

When I finally crossed the finish line, my net time was 6:09, good enough for 2nd in my age group. The medal fittingly depicts a head-on steam locomotive with a cow-catcher. The age-group award was a plush towel that doubled as a seat cover; I could choose my color (I picked a bright blue). There was plenty of pizza and chocolate milk as well as a locally brewed beer. All in all, a good race.