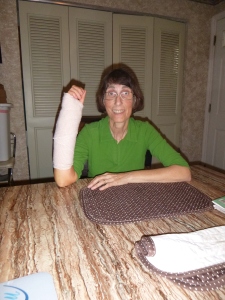 I’m sitting here this afternoon trying to ignore the fact that I should be on my way to Tel Aviv so I could take part in the Jerusalem Marathon on March 1. Months of planning and saving and discussing have all gone by the wayside due to a nasty fall I took on the Delirium trail race several weeks back. Originally I thought the fall had resulted in simply a bad sprain but that was not the case. Instead, I ended up with my first broken arm (and my first broken bone since I was 9 years old and broke my leg). Not only was my arm broken but the angle of my distal radius was displaced enough to warrant surgery and placement of a titanium plate in my wrist.
Of course, right after I fell (but after I managed to complete the 24 hour race), I began the usual first aid routine of RICE (Rest, Ice, Elevation, and Compression) and continued that throughout the week after I returned home. Although my wrist and arm were still painful and had begun to turn all kinds of fascinating colors, I decided everything was still okay and went on to do the Gainesville Five Points of Life Marathon the following Sunday. That may have been a pretty dumb thing to do but I was still optimistic that my fall was like all my others – just a pesky irritant.
However, after the marathon, the pain continued and I began to get more concerned, especially with the upcoming trip to Israel only a couple of weeks away. On Monday, I called my doctor, had an x-ray, and was told the bone was indeed broken. The doctor referred me to an orthopedic surgeon who saw me on Thursday and said I needed surgery to reset my wrist and have a plate inserted to hold it in place. The surgery was set for Friday morning. Everything went well and I spent the weekend recuperating and trying to be a very docile and compliant patient. After much discussion and soul-searching, my husband and I decided that trying to travel 3 days post-surgery and then do a race later in the week was not a good idea. The surgeon thought doing a race with a non-removable cast on my arm was a very bad idea because sweat and swelling inside the cast could be a problem. While I felt sure I could manage the race okay, I realized that the long flights involved would leave me uncomfortable and exhausted. Diana, a racer friend of mine, reminded me that DNS really means “Do Nothing Stupid” and I decided to heed those wise words of advice.
Still, as I sit here today with a cast and bandage over my sore but healing wrist and arm, I can’t help but wonder and daydream about visiting Israel and taking part in the marathon – it’s not in the cards this year but maybe next year in Jerusalem.