There are some races that, just by their very nature, appeal to me. The Cape Cod Clam Chowdah Challenge is a perfect example. This ‘challenge’ consists of a half marathon on Saturday followed by a full marathon on Sunday, similar to a New England Goofy. Challengers who completed both races within the time limits of 3 and 6 hours respectively would get a special 24 ounce clam chowder mug. How could I resist? Well, I couldn’t, not me, especially when this would give me a chance to see my sister and niece again. Both Margie and Emily signed up for the half marathon while I signed on for the Challenge. On Friday they drove to the Cape from central MA while I flew into Providence (nice little airport, TF Green), rented a car, and drove to Falmouth. We met at the historic Captain Tom Lawrence House, a neat old bed and breakfast run by Ann and Jim and only a five minute walk from the start and finish line of both races.

Of course, I was concerned about the strict time limits, but that was part of the challenge. The REALLY big unknown was the weather. The entire northeast was anticipating the first Nor’easter of the season and it was headed our way with the threat of snow and ice, freezing temperatures, and gusty winds. Fortunately, Cape Cod escaped the brunt of the storm – it was in the upper 40’s all weekend, with rain Saturday evening and high winds up to 65 mph but no snow or ice. That was a relief for me. I had warm clothes and a rain slicker but my shoes for both races were lightweight racers that would probably not stand up to walking through snow for miles and miles. And I don’t like driving in snow or ice, so I was concerned about my trip back to Providence on Sunday afternoon. The weather turned out to be a minor issue; sure, it was freezing cold and I was dressed in multiple layers of clothing, but the rain stopped for both races, we had no snow at all in Falmouth, and the wind was the only difficult aspect weather-wise and that was manageable.

Since I arrived earlier than Margie and Emily, and because I was hungry after the 1 ½ hour drive from Providence, I had a filling lunch (haddock chowder and crabmeat roll – seafood heaven for me) at the Quarterdeck Restaurant in the heart of town and then walked around looking in the quaint gift shops and visiting the public library. At 3 I headed to our Bed and Breakfast, checked in, and started unpacking. My sister and niece arrived about 5 pm and we promptly walked over to packet pickup at the Lawrence School, a few blocks from our B & B. There was no expo on Friday evening, just packet pickup, and even this was a bit unusual in that we picked up our bibs (I had 2, one for the half, one for the full) but had to wait until the next day to get our goody bag and tee shirt. The chips were attached to the bibs so no fiddling with laces. We returned to the B & B to get our gear ready. Once we were satisfied we were all set for the next day’s event, we headed back out to for sustenance. We found a local diner in the downtown area and had clam chowder and sandwiches and then returned to our room for some sleep.

This would be only the second half marathon for my sister (she did the Maine half marathon when I did the full several years ago) and my niece had never done a race at all. Emily is 20, young and healthy, and, just like my 26 year-old son, can just go out and do it, no training necessary. Amazing!

Because there was no coffee pot in our room, and we wanted to eat several hours before the official full breakfast offered by our hosts, we rose at 4:30 am on Saturday morning to drive to a nearby Dunkin Donuts. We loaded up on hot coffee, pumpkin muffins, and doughnuts, then hurried back to our room for the rest of our preparations and then on to the Village Green for the race start. We were able to wait inside the Post Office on Saturday to stay warm; unfortunately on Sunday the Post Office was closed, so before the marathon I had to huddle with several dozen others racers in the outer entrance of the building to stay out of the wind.

Both races follow outstandingly beautiful courses. This was the 34th year of the marathon and it is obvious that the race organizers from the Falmouth Track Club really know what they are doing. In 1993, they included a marathon relay, and this year the half marathon was added on Saturday. The half marathon begins and ends in the town proper and then follows the coast and a bike path as well as several attractive neighborhoods. There are enchanting views of Nobska Lighthouse and Vineyard Sound.

The full marathon is a one-loop course that starts out on the Village Green and is relatively flat for the first several miles or so. We pass by the Falmouth Inner Harbor, Nantucket Sound, Woods Hole, some cranberry bogs and shady wooded areas, and the communities of West Falmouth and Sippiwissett. There are a number of rolling hills on the second half of the course which caused some groans from runners but I enjoy hills (within reason) so I found them to be fun rather than difficult. The prettiest section of the course is along the Sound by the Nobska Lighthouse but both courses are extremely scenic.

Neat stuff about these races:
• both races start with the firing of a small cannon
• most people in town seem to know about the races and are supportive; while there are not a huge number of spectators (that may in part have been due to the cold weather), the general atmosphere is positive and vibrant
• race shirts are cotton long-sleeve tees, purple for the half, light blue for the full, and bright yellow for the Challenge; these are shirts I will wear, unlike most of the tech fabric shirts from other races, and the long-sleeves make them good for the winter months
• post-race food is served back at the Lawrence School and is worth waiting for: clam chowder, salad, cranberry juice, and rolls. My only complaint about this entire weekend was that they ran out of chowder after the marathon. They had plenty of ziti but no more chowder (the lady in front of me was ready to fill up her new chowder mug with some) – that was disappointing but I did manage to get some after the half marathon.
• there were mile markers at every mile, every 5 k had a marker, and there were several clocks on the course, so it was easy to keep on pace and know how I was doing.
• course markings were on the road, white for the half, blue for the full, easy to see (although I’m not sure how that would work if the roads had been covered with snow) and volunteers were at every critical turn.
• aid stations were set up about every 3 miles or so and were stocked with water and sports drink (cytomax I think) and LOTS of wonderful volunteers (the number of people helping was really impressive, especially when comparised to the previous week’s race at Apalachicola – of course, this marathon had been around awhile so there may be hope for Apalach down the road)
• roads were not closed to traffic and some people complained about this but I found that traffic was extremely light both days and drivers were very courteous and careful of runners and walkers
• before the marathon start we could indulge in bagels, doughnuts, and hot coffee from Dunkin Donuts; I took full advantage of this, saving a jelly doughnut for post-race sustenance and squirreling away a bagel in my vest pocket for munching on during the later miles of the race
• the Clam Chowdah Challenge prize is impressive – a 24 ounce ceramic mug

I hope the race organizers decide to hold the Challenge again – I would love a reason to return to Falmouth! 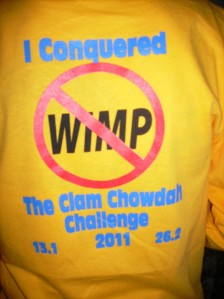